Thursday 22 December saw the inauguration of the first Volvo FM Electric, 44t, delivered to Transports Thevenet in Creuzier-le-Vieux on the Capitole site. This trucks has the particularity of being manufactured with steel without fossil energy.

During this event, Eric Thevenet affirmed his ambition for decarbonisation and our partner Volvo Trucks France had the great pleasure of handing him the keys to the first truck from their factory in Tuve, Sweden.

The 100% electric truck is intended to carry out weekly shuttles between the Thevenet site and the  L’Oréal factory.

Stéphane Verdier, member of the Purchasing Commission and Fabien GONNORD, Technical Manager of the Astre Group had the opportunity to discuss with  Marcus Hörberg, President of Volvo Trucks France.

Congratulations to Eric THEVENET, director of Transports Thevenet for this acquisition and to our partner for this great innovation! 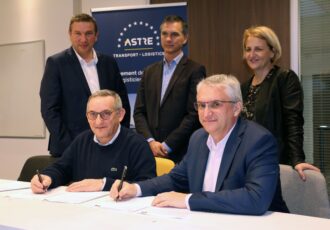