With 20 years of experience in the field of transport operations, Alexandre DEMIDOFF is ready to take on Astre’s ambitious objectives:
“By joining the Group, I want to lead and energise Astre Commercial’s commercial and operational activities and carry out innovative projects that are essential to the development of our positions on the European transport market of tomorrow. Digitalisation, energy transition, the last kilometre, the development of exchanges and the Palet System network at international level are at the heart of our ambition. There are many exciting areas for the future of our member companies.”
The Astre cooperative completes and balances its structure with a pair of DGAs, Alexandre DEMIDOFF for Operations and Nicolas CHARTIER for Services and IS, alongside Denis BAUDOUIN, President of the Group.

Alexandre has spent his career in large freight forwarding companies across Europe. He has held various management and executive positions in charge of operations and business development, managing profit centres and opening and developing European networks or new subsidiaries and agencies. He worked for GEFCO for 12 years in several countries (France, Czech Republic and Russia). He then joined FM Russia in 2013 and the CAT group from 2014 to 2018. In 2018, he took the position of Director of Pan-European “Transport Commission” activities for the Transalliance group before joining Astre. 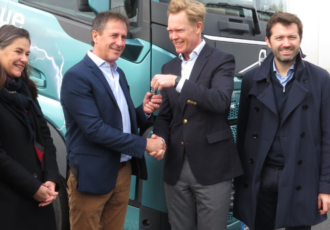